‘A fragment of eternity’: the mesmerising murmurations of Europe’s starlings – The Guardian 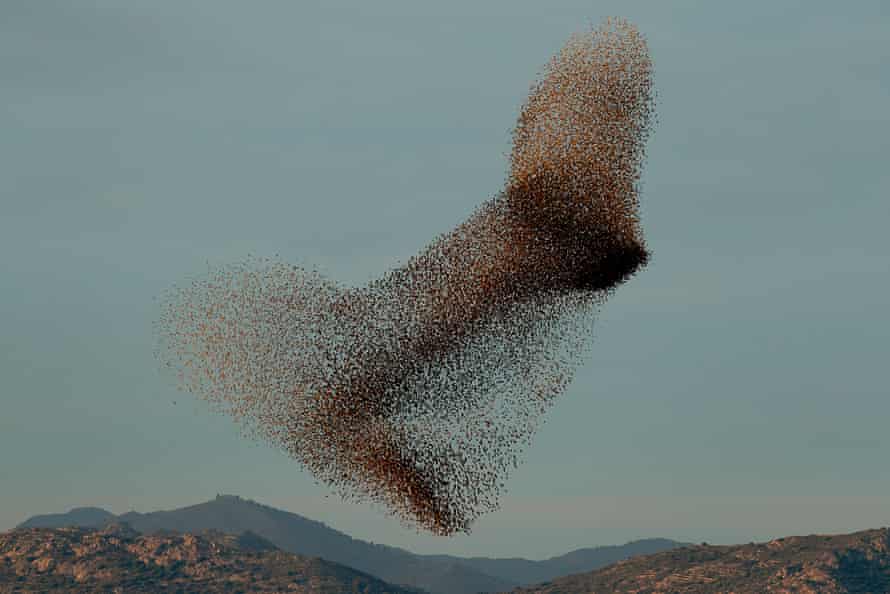 Søren Solkær was 10 when he witnessed his first starling murmuration, on the west coast of Denmark: more than 100,000 birds, making movies in the sky as they were being corralled by a falcon. It would be nearly 40 years before the photographer, best known for intimate, often playful portraits of artists and musicians, would revisit this scene of his youth, setting aside a week to capture the birds in motion.

That was five years ago, and Solkær hasn’t stopped, making the murmurations the subject of an exhibition and book, Black Sun. “I’ve pretty much done it every winter ever since, and I don’t have any plans of stopping anytime soon,” he says. Before then, and despite his childhood awakening, Solkær had never turned his lens to birds. “I still don’t photograph individual birds, because I don’t find it visually interesting to just depict a bird, it doesn’t interest me artistically.”

In fact, there are eight individual portraits of starlings in Black Sun. Solkær says that was to give colour and context to the bigger picture, “because they really look like small dots of ink in my big photographs. I wanted to show that they’re really beautiful, metallic birds.”

Solkær became obsessed with the starlings – not just the shapes they made with their highly coordinated movements, but in their ecology, as he followed their migration across Europe, from Denmark to Rome to Catalonia. He began by the Unesco World Heritage-listed Wadden Sea, the largest unbroken system of intertidal mudflats in the world, which stretches along parts of the Danish, German and Dutch coasts.

Here, every spring and autumn, the skies are darkened by murmurations, known locally as “sort sol” – or “black sun”, hence the book’s title. Why starlings murmurate is not fully understood. One theory is that massive numbers help the birds keep warm before going to roost; another is that it maximises each individual’s chance of survival when under assault by aerial predators.

How the birds move together in such close proximity, as though one organism, is another mystery. One study found that each starling was responding instantly to the six or seven birds closest to it to maintain group cohesion. The time Solkær invested in the project paid off.

“I think a lot of photography only gets interesting if you really go deep with it, and images start to appear that most people wouldn’t get because they don’t spend enough hours doing it.”

When Solkær started the project, he says, he read poetry and studied paintings of the murmurations dating back to the 17th century, and was struck that the fascination people felt at the time mirrored his own. He says his photographs of the birds are an attempt to capture “a fragment of eternity”. He estimates that he’s been out on about 200 nights, and on each occasion the spectacle has been unique, never to be repeated.

That, he says, makes the scene timeless, and at the same time keeps it fresh.

“It’s such an ephemeral sensation. You know that it’s happening right now, in a second it’s gone and it will never come back, and I find that really fascinating. It’s one of the most exciting things I’ve ever tried. It can compete with seeing Arcade Fire or Amy Winehouse on a big stage at Glastonbury and being on stage with them – I think this is equally exciting.”

Black Sun is at the Nanda\Hobbs gallery in Sydney until 11 June.