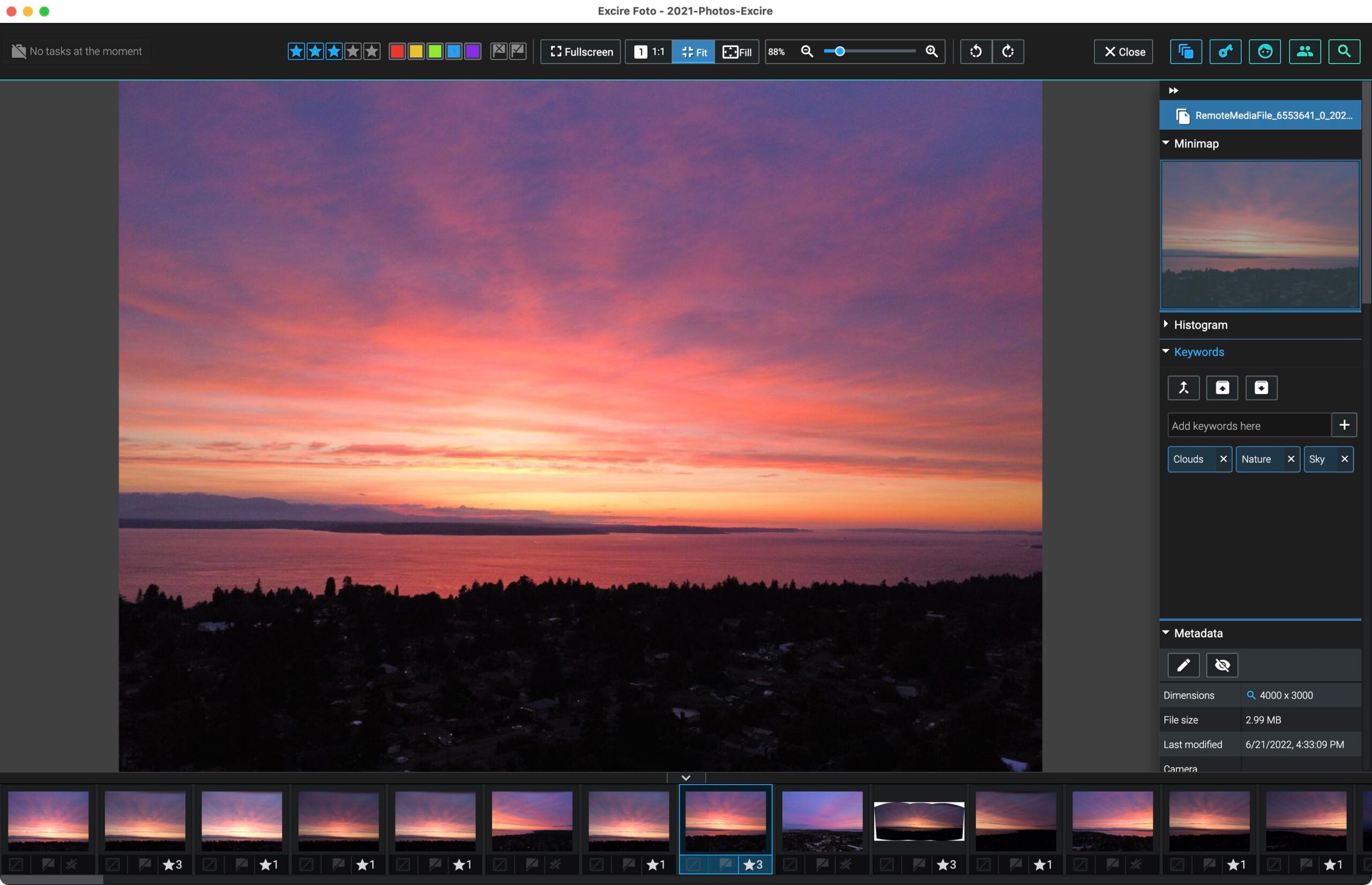 I sometimes feel like the odd-photographer-out when it comes to working with my photo library. I’ve always seen the value of tagging images with additional metadata such as keywords and the names of people who appear (I’ve even written a book about the topic).

However, many people just don’t want to bother. It’s an extra step—an impediment really—before they can review, edit, and share their images. It requires switching into a word-based mindset instead of an image-based mindset. And, well, it’s boring.

And yet, there will come a time when you need to find something in your increasingly growing image collection, and as you’re scrolling through thumbnails and trying to remember dates and events from the past, you’ll think, “Maybe I should have done some keywording at some point.”

In an earlier column, I took a high-level look at utilities that use AI technologies to help with this task. One of the standouts was Excire Foto, which has just been updated to version 2.0 (and branded Excire Foto 2022). I was struck by its ability to automatically tag photos, and also the granularity you can use when searching for images. Let’s take it for a spin.

Related: The best photo editor for every photographer

Excire Foto is a standalone app for macOS or Windows, which means it serves as your photo library manager. You point it at existing folders of images; you can also use the Copy and Add command to read images from a camera or memory card and save them to a location of your choice. If you use a managed catalog such as Lightroom or Capture One that tracks metadata in its own way, Excire Foto won’t work as well. A separate product, Excire Search 2, is a plug-in for Lightroom Classic.

Or, Excire Foto could be the first step in your workflow: import images into it, tag and rate them, save the metadata to a disk (more on that just ahead), and then ingest the photos into the managed photo editing app of your choice.

Since the app manages your library, it doesn’t offer any photo editing features. Instead, you can send an image to another app, such as Photoshop, but its edits are not round-tripped back to Excire Foto.

For my testing, I copied 12,574 photos (593 GB) from my main photo storage to an external SSD connected to my 2021 16-inch MacBook Pro, which is configured with an M1 Max processor. Importing them into Excire Photo took about 38 minutes, which entailed adding the images to its database, generating thumbnail previews, and analyzing the photos for content. Performance will depend on hardware, particularly in the analysis stage, but it’s safe to say that adding a large number of photos is a task that can run while you’re doing something else or overnight. Importing a typical day’s worth of 194 images took less than a minute.

To me, those numbers are pretty impressive, considering the software is using machine learning to identify objects and scenes it recognizes. But still, do you really care about how long an app imports images? Probably not.

But this is what you will care about: In many other apps, the next step after importing would be to go through your images and tag them with relevant terms to make them easier to find later. In Excire Foto, at this point all the images include automatically generated keywords—much of the work is already done for you. You can then jump to reviewing the photos by assigning star ratings and color labels, and quickly pick out the keepers.

I know I sound like a great big photo nerd about this, but it’s exactly the type of situation where computational photography can make a big difference. To not care about keywords and still get the advantages of tagged photos without any extra work? Magic.

I find that Excire Foto does a decent-to-good job of identifying objects and characteristics in the photos. It doesn’t catch everything, and occasionally adds keywords that aren’t accurate. That’s where manual intervention comes in. You can manually delete keywords or add new ones to flesh out the metadata with tags you’re likely to search for later. For example, I like to add the season name so I can quickly locate autumn or winter scenes. Tags that the software applies appear with blue outlines, while tags you add show up with gray outlines. It’s also easy to copy and paste keywords among multiple images.

All of the metadata is stored in the app’s database, not with the images themselves, so you’re not cluttering up your image directories with app-specific files (a pet peeve of mine, perhaps because I end up testing so many different ones). If you prefer to keep the data with the files, you can opt to always use sidecar files, which writes the information to standard .XMP text files. Or, you can manually store the metadata in sidecar files for just the images you want.

The flip side of working with keywords and other metadata is how quickly things can get complicated. Most apps try to keep the search as simple as possible to appeal to the most people, but Excire Foto embraces multiple ways to search for photos.

A keyword search lets you browse the existing tags and group them together; as you build criteria, you can see how many matches are made before running the search. The search results panel also keeps recent searches available for quick access.

Or consider the ability to find people in photos. The Find Faces search gives you options for the number of faces that appear, approximate ages, the ratio of male to female, and a preference for smiling or not smiling expressions.

Curiously, the people search lacks the ability to name individuals. To locate a specific person you must open an image in which they appear, click the Find People button, select the box on the person’s face, and then run the search. You can save that search as a collection (such as “Jeff”), but it’s not dynamically updated. If you add new photos of that person, you need to manually add them to the collection.

It appears that the software isn’t necessarily built for identifying specific people, instead, it’s looking for shared characteristics based on whichever source image is chosen. Some searches on my face brought up hundreds of results, while others drew fewer hits.

New in Excire Foto 2022 is a feature for locating duplicate photos. This is a tricky task because what you and I think of as a duplicate might not match what the software identifies. For instance, in my library, I was surprised that performing a duplicate search set to find exact duplicates brought up only 10 matches.

That’s because this criteria looks for images that are the exact same file, not just visually similar. Those photos turned out to be shots that were imported twice for some reason (indicated by their file names: DSCF3161.jpg and DSCF3161-2.jpg).

When I performed a duplicate search with the criteria set to Near Duplicates: Strict, I got more of what I expected. In the 1007 matches, many were groups of burst photos and also a selection of image files where I’d shot in Raw+JPEG mode and both versions were imported. The Duplicate Flagging Assistant includes the ability to reject non-Raw images, or in the advanced options you can drill down and flag photos with more specific criteria such as JPEGs with the short edges measuring less than 1024 pixels, for example.

As with all duplicate finding features, the software’s job is primarily to present you with the possible matches. It’s up to you to review the results and determine which images should be flagged or tossed.

It’s always tempting to jump straight to editing images, but ignoring metadata catches us out at some point. When a tool such as Excire Foto can shoulder a large portion of that work, we get to spend more time on editing, which is the more exciting part of the post-production process, anyway.