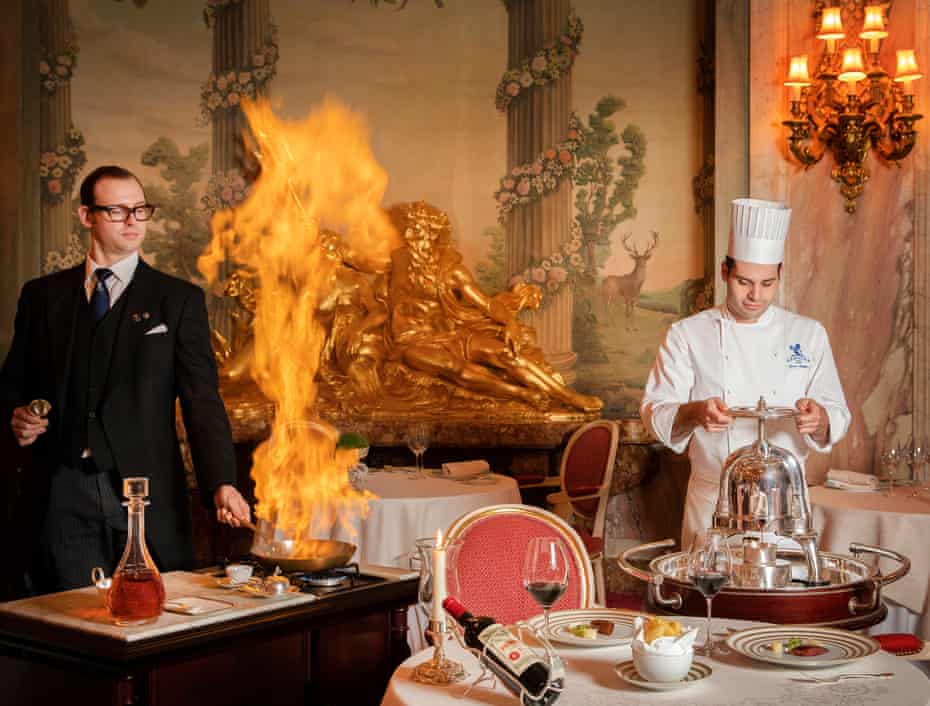 ‘They’re making a French dish called Pressed Duck. The bird’s blood is squeezed out by that silver press, then used to make a sauce. I’ve tried it and it’s delicious’

I’ve always enjoyed working with chefs. There’s a lot of synergy between cooking and photography. The first shoot I did at the Ritz restaurant was about 10 years ago and the relationship grew from there. Four years ago, they published their first cookbook, which I shot. My most successful work happens when I’ve spent a bit of time getting to know a place – and the Ritz is somewhere I’m now very familiar with.

There are many locations there I’d like to shoot, but it’s all to do with timing. You can’t use the public spaces while they’re full of diners. We had to do this in between lunch and dinner: we didn’t have a lot of time, maybe 20 minutes to set up, then another 20 to execute it. In these situations, I have to go in with a vision worked out ahead and nail it while I have the opportunity.

Food at the Ritz tends to look immaculate. I could just shoot it on a plate against a white background – but I try to bring in a human element when it’s justified. In this case, what’s being demonstrated is part of the restaurant’s Les Arts de la Table service, where the preparation is done in front of diners with an element of theatre.

Here we can see Luigi Cagnin, the restaurant manager, and Spencer Metzger, the chef, preparing canard à la presse, or pressed duck. It’s a French dish, invented in the early 19th century, and isn’t on many menus now. The breast and legs of the duck are served with a sauce partly made with its own blood, which is squeezed out of the carcass using a large silver-plated press. The chef is turning the press’s top.

I’ve tried it – it is delicious, with a really intense flavour. A simple plated shot wouldn’t do the dish justice. It’s all about the process. I think the device – the press – has a certain beauty. I wanted to give a sense of the whole procedure in a single image, so I used a bit of artistic license. In reality, the liquid from the press would be collected first then flambéed.

There were various reasons for choosing to shoot where I did. That part of the dining room is spectacular and I really wanted the golden statue in the background. Also, a slightly darker area maximises the impact of the flame, the sense that when you’re watching this you can really feel the heat. The flambé flame only lasts a second so I had to be quick. I asked Luigi to ignite the pan three or four times before I got what I wanted.

When I’m photographing a dish, I try to get across what’s unique or special about it. I’m very interested in the people and personalities in restaurants. One thing I love about this image is that Luigi is in tails and Spencer is wearing a classic tall chef’s hat – their usual uniform. Spencer started working at 16, when he arrived to do work experience. He’s recently been promoted to head chef.

I have such admiration for chefs, particularly given what happened to hospitality over the last couple of years. During lockdown, I came up with a project where I travelled the country photographing chefs in their empty restaurants. It was pretty much the opposite to my usual approach. I shot in black and white which seemed to accentuate how all the life had drained out of these spaces. It was haunting, such a contrast to the usual high-velocity, energetic environment chefs work in. It’s been a joy to see life returning.

Born: London, 1974
Trained: Ravensbourne Art College, London, and University of Northumbria.
Influences: “Henri Cartier-Bresson and Robert Doisneau. And I love Bob Carlos Clarke for his take on chefs and kitchen life.”
High point: “Twice winning a category at the Pink Lady food photographer of the year awards – including this year for this image.”
Low point: “Selling our house to be able to afford to continue doing the job I love.”
Top tip: “Don’t always settle for the first incarnation of a shot. Bank the first shot, but push it – minor adjustments can make all the difference.”