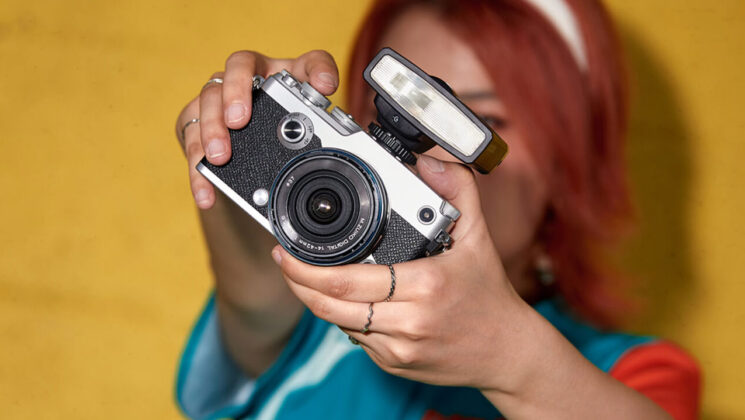 With the trend for retro-looking cameras and lenses over the last few years, I’m surprised it’s taken a company this long to come out with a matching retro-styled speedlight to go with them. I mean, how awkward is it when you’re out with your hipster friends with your Leica M or Nikon Z fc and a fancy modern flash on top?

Well, now, Godox has the answer in the form of the Godox Lux Junior, a 1980s-styled speedlight that actually looks quite useful, if I’m completely honest. To complete that retro feel that’s oh, so last century, it doesn’t support TTL, High Speed Sync or even Godox’s own 2.4Ghz X wireless flash trigger system!

In all seriousness, for those of us who do still shoot film cameras from time to time, it does look quite good if all you need is a little on-camera flash for a bit of fill. As mentioned, it doesn’t support TTL or HSS and has only the single central trigger pin in the centre of the foot in order to fire at whatever setting you put on the back of the unit using the dial. And it even features a sync socket on the side for hooking up a cable to cameras that have a PC Sync socket but no hotshoe firing pin.

Even though it doesn’t support TTL, it does support “auto” mode. You can read more about auto flash here, but it typically uses a photocell in the front of a flash unit to detect the amount of light being reflected off a subject and fires the flash if it thinks it’s too dark, adjusting its output accordingly. Whether or not this is how the Godox Lux Junior’s auto mode works is unclear as they don’t really dive into it on the product page, but as it’s not TTL, I’d be keen to see how accurate it is.

It’s certainly not the most powerful of flashes, either, coming in at a guide number of 12 metres at ISO100. Although, it’s not that bad. 12 metres is 39ft. For comparison, the Godox TT350 is advertised as having a 36 metres guide number @ ISO 100 when zoomed to 105mm. I expect with the TT350 zoomed to 28mm to match the Lux Junior, it’s probably pretty close in output.

Despite not having a receiver for the familiar 2.4Ghz Godox X flash trigger system built into it, the Lux Junior does support some basic off-camera flash, using the S1 and S2 optical slave modes. One is the standard basic dumb “see a flash and go off” mode while the other will (or at least, should) ignore TTL pre-flashes and fire just on the last one to sync up with the shutter actually going off. And, of course, you’ve got that sync socket if you really want to wire it into a radio receiver.

As a pretty basic and bare-bones flash and comes with a matching bare-bones price tag. The Godox Lux Junior retro camera flash is available to pre-order now for $69 and is expected to start shipping in mid-August, 2022. I have to admit, I’m pretty tempted to grab one just to have it handy for use with my old film cameras that just have the single-pin hotshoe on top.