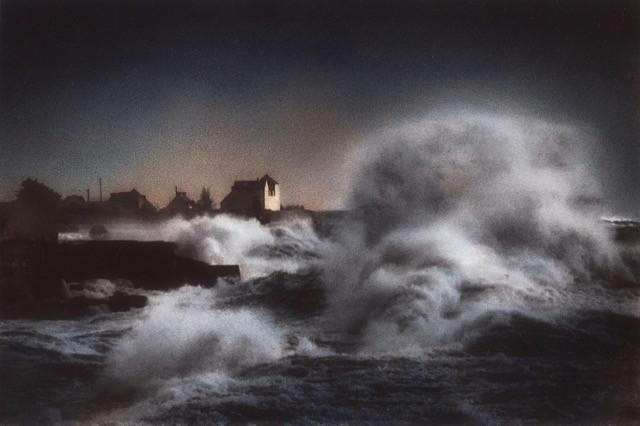 The exhibition “Les tempêtueuses” by Irène Jonas presented by La chambre claire Galerie de Douarnenez at the beginning of this summer 2022 testifies, in its first part, to the meteorological and geographical elements close to the environment of the Pays Bigouden in which Irène Jonas now lives two-thirds of her time. It traces the storms that regularly break on the Brittany coast, from Lesconil to Saint-Guénolé and which forge the character of the landscape as well as that of its inhabitants.

Irène Jonas photographs it discreetly. She surveys the places that resonate within her. Irène is a researcher. The images she captures during her wanderings resonate with a buried memory that does not want to be spoken about. After the black and white shot, she silently takes her positives and colors them. The paint is only there to make the light appear better. The colors affirm the strangeness of the landscapes or the characters. She searches for what lies within her in the deep darkness. It’s the event that comes to her, Irene doesn’t provoke them. She listens to storms as well as to people in her quest as a sociologist. Aesthetics is always present, as a consolation of the unspeakable.

The second part of the exhibition presents photographs from her series “Amniotics”. The photographer went underwater, as if in search of relief. The light filtered by the water blurs the darkness. Weightlessness suspends time.

Member of the Agence Révélateur since 2016, Irène Jonas pursues a double approach, one in black and white, the other more artistic with painted photographs, from which those presented in Douarnenez were selected. In 2018, she won the first prize FotoMasterclass and exhibited at Fotofever. In 2019, she exhibited at the Opéra de Rennes on the theme of the Flying Dutchman and produced a projection of 80 photos on a musical piece by Jean Cras. In 2021, she exhibited “Un Eté Sans Fin” at the Taylor Gallery and was the Guest of Honor at the “Les femmes s’exposent” photo festival in Houlgate.

Her book “Dormir, dit-elle” was published by Arnaud Bizalion, “Crépuscules” by Éditions de Juillet and “Letters to Rosa B.” (to be published in September 2022)