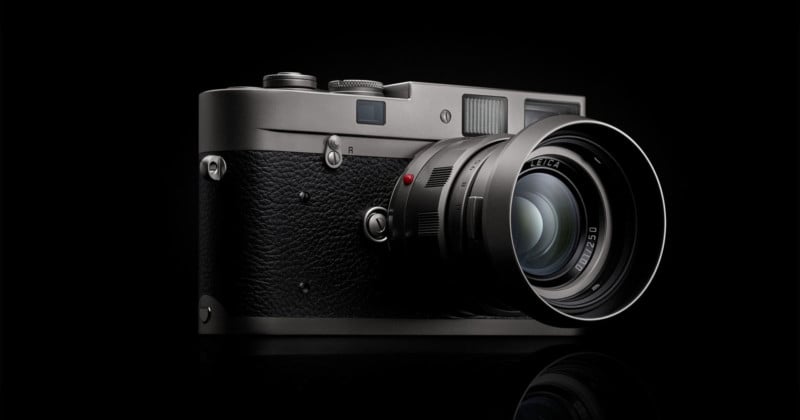 Leica has announced a new limited edition analog camera kit, the Leica M-A “Titan.” Paired with a Summicron-M 50mm f/2 ASPH, the camera is set to retail for $20,000 and is limited to 250 pieces worldwide.

The all-mechanical Leica M-A pairs with the Summicron lens in a matching titanium finish, which Leica says is not just a surface treatment but all external parts are machined out of solid titanium that it says results in extreme durability and less weight. Leica says titanium is twice as hard as alumnium and 45% lighter than brass, making it one of the toughest and long-lasting metals available.

As noted, the Leica M-A is purely mechanical, which means it doesn’t need power or data connections. Leica says that it is the epitome of its philosophy to concentrate on the essential, calling it an example of photography in its purest form.

The M-A “Titan” is the sixth time Leica has released a limited Edition camera with a titanium exterior, a tradition it says it continues when it launched the M6 TTL “Titanium” in 2001. It and the other titanium cameras have typically been film cameras, with the exception of the M9 Titan that Leica introduced in 2010 and the M-P (Typ 240) Titanium set it launched in 2016.

“The sophisticated design of the special edition is enhanced by the classic ‘Ernst Leitz Wetzlar’ script on the top plate. The set includes the APO-Summicron-M 50 f/2 ASPH., whose external components are also made of titanium for this special edition — and whose appearance is modeled on the very first Summicron-M with a 50 mm focal length, introduced in 1956,” Leica says.

“Another element of the set’s classic aesthetic is the round lens hood, also made of solid titanium. With its unparalleled optical performance, the APO-Summicron-M 50 f/2 ASPH. represents the pinnacle of full-frame lens design. The set comes in a special presentation box with an inner lining of black silk.”

The Leica M-A “Titan” is available to pre-order only from Leica Stores and the Leica Store Oneline and is priced at $19,995 and are limited to 250 total pieces worldwide. Leica says it expects the camera to start shipping “soon” and once all 250 units are spoken for, no more will be available.