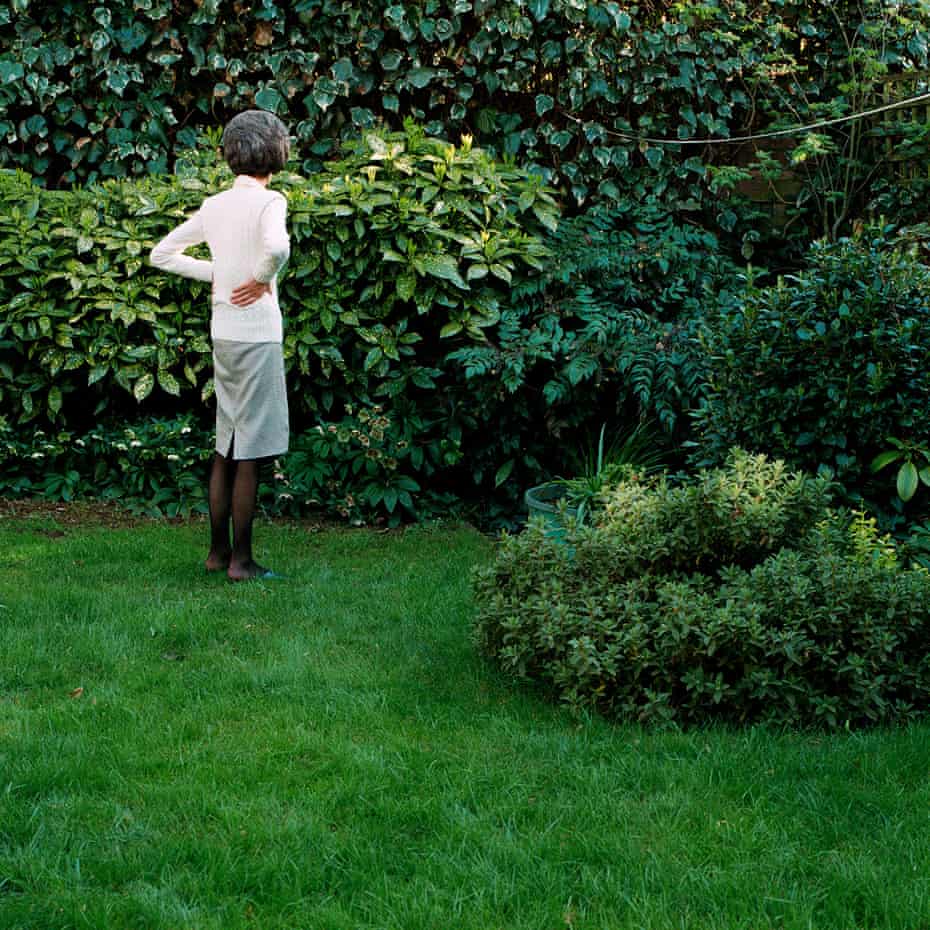 ‘She seems to be surveying her domain, knowing she will soon be on her own. Or maybe she’s just thinking about what needs done in the garden’

I began making photographs at home with my parents nearly 15 years ago. My elderly father was going through a slow decline and I wanted to spend time with him. I’m not sure if I was fully conscious of it then, but I was using my camera to do that thing photography does: allowing you to hold on to something on the brink of disappearing.

I was in my late 20s, didn’t yet have children, and I lived close to their house, where I’d grown up. When I wasn’t working I’d go back and forth, sometimes staying for a day or two. The images, which would later make up the book Still Here, came about privately, over a long period of time.

In the photographs of my father, he is almost a child again in the way he had to be cared for. He is there and already absent. But my mother was 24 years younger than him and, at the time, I could not comprehend her not being there. Looking back at the pictures now, I see the tension between the images of them, the different stages they were at. My mother is vulnerable yet strong, active and in control, albeit with a frailty that presages what was to come.

She was happy for the pictures of her to be quite intimate – there’s one in the bath, another of her screwing in a lightbulb with curlers in her hair, something I don’t think I’d ever seen before. My parents were both very supportive of the process, though only my mother got to see the images as a book and in exhibitions.

What is immediately striking about this shot is the fact that it’s so verdant. The saturation of green becomes a kind of claustrophobic, containing and constraining space: there isn’t anywhere outside it. But my mother is facing away – from the camera, from the house, from me. She seems to be surveying her domain and reaching beyond it, looking out to what might exist on the other side of the garden wall. It becomes symbolic of where she was at, emotionally and psychologically, in her role of being the younger partner looking after the older one, knowing she’s soon going to be on her own.

She cuts a really interesting figure. She’s dressed quite smartly, her hair perfectly in place and wearing clothes she could be going to work in, although she’s also got slippers on. She has a strong stance, hands on hips, feet placed firmly on the ground, and is looking towards the corner of the garden where the two walls meet, invisible to us. But also in that corner is the washing line, which I think of as an umbilical cord that goes from the house to the boundary edge of the domestic sphere, pulling her back.

Of course, I’m reading all this into the image when, as far as I can recall, she was just looking at what needed to be done in the garden. But this photograph reminds me off a picture I took during lockdown of my daughter Eden inside a plastic seedling tent in our garden. There’s a 10-year gap between the two images, but they both provoke ideas of love, protection and isolation – one made during a pandemic, the other made during another time leading to death. The themes of mothering, being mothered, love, loss and time run through my work. That picture of Eden features in my series Fugue, which also includes a photograph of my mother’s ashes being scattered in our own garden.