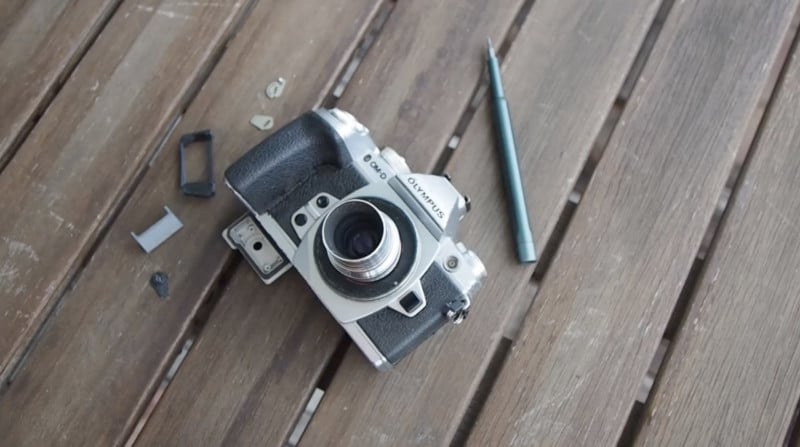 An industrious photographer 3D-printed replacement parts for his broken Olympus E-M1 after the camera froze in negative four-degrees Fahrenheit conditions while snowboarding.

Witono posted a video to his YouTube channel where he shows how he created his own replacements for the battery door lever, the eyecup, and the accessory port cover, all parts that broke while snowboarding in Canada.

Speaking to PetaPixel, Witono talks of his disdain for electronic waste.

“I am an engineer and entrepreneur for my startup on sustainability, therefore I dislike the idea of buying and throwing semi-functional electronics. I want to keep them working for as long as possible therefore I designed the parts in my free time, even though wasting the filaments on several test prototyping prints may not be the best idea,” explains Witono.

“I hope by sharing this project will help inspire more people to treasure their electronics and consume less.” Witono says that he took his E-M1 on a snowboarding trip to Canada where the temperature was a freezing negative 4-degrees Fahrenheit. The shutter curtain failed but he was able to get that fixed in China.

However, while the shutter had to be taken to a specialist, the other parts that had taken a battering such as the battery door lever was fixed by Witono himself using a 3D printer. Writing on his YouTube channel, he says the battery door lever took six iterations to get the perfect dimension, but this was partly down to the fact Witono was using an old 3D printer.

“The eyecup was a bummer, I could have printed with soft TPU (I do not have the filament) to mimic the rubber deformation. Instead, this is just an aesthetic part with no deformation. Designed with bridging without support material,” he writes. However, the accessory port cover was far easier and Witono reckons his design skills improved because he got the perfect fitting on only his second try. Witono, who experiments with alternative lenses and DIY lenses, has also 3D-Printed an odd-looking camera lens for his 7D, complete with modular aperture blades. He demonstrated the type of effects you can achieve it with in a video on his YouTube channel.

The inventive photographer also printed a lens hood for an Olympic 12mm f/2 after being horrified at the $80 price tag for a replacement online. This also seemed to work well enough, as well as looking stylish.

Witono isn’t the only cameraman printing his own gear. One cinematographer 3D-printed an entire 35mm camera, while another photographer actually 3D-printed his own wet plate pictures.