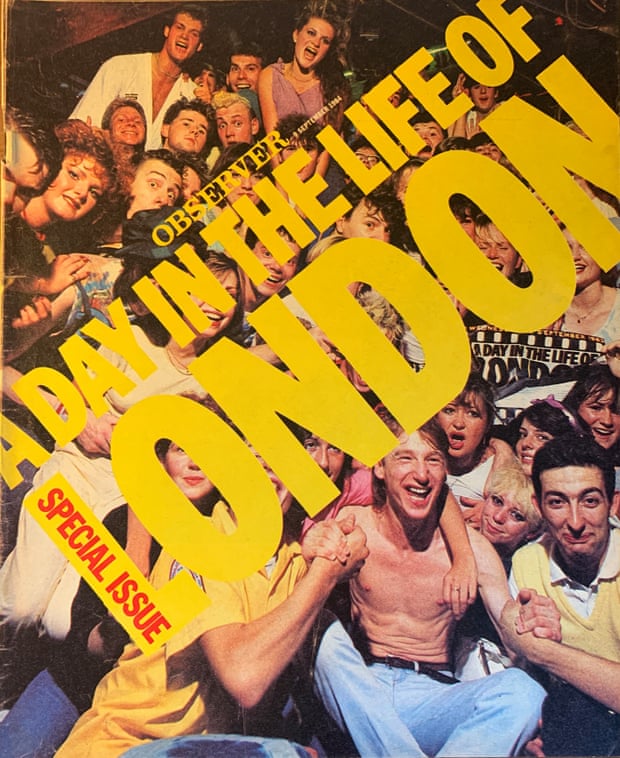 ‘A day within the life of London’ was based on a selection of photographs of the capital taken over 24 hours by 100 photographers commissioned for a book of the same name simply by Red Saunders and Syd Shelton, with London legend DJ Gary Crowley among the throng on the cover ( Observer Magazine , 9 September 1984).

Saunders plus Shelton ‘wheedled for permission to enter prisons, zoos, hospitals, TV studios, Turkish baths, monasteries…’ but the oddest assignment was the one given to Barbara Bellingham, whose sole task was to take pictures of women’s legs. She reported ‘complete cooperation and a great deal of mirth’ and became so involved she forgot about her parked car. But the police didn’t, and towed it away.

A picture through the open doors of a mud-caked van with ‘casual labourers’ sitting on wooden box seats and waiting to be driven to Brighton for a day’s building work is a reminder all was far from well in terms of employment. ‘At precisely 6am the men – almost exclusively Irish : gather by the hundreds inside the streets behind Camden Town tube station. ’

There’s a gaudy Martin Parr-like shot associated with ‘the luxurious sun room at the Sanctuary, Covent Garden’s club for women’ in which several women lie face-down in the tanning machines as if caught in their maw.

But the most shocking image is of two women dressed for work in the Quarantine Centre at Heathrow airport in giant puffed-up respirator suits and headgear to protect against ‘air-transmitted diseases’. Shocking because it no longer looks at all shocking.