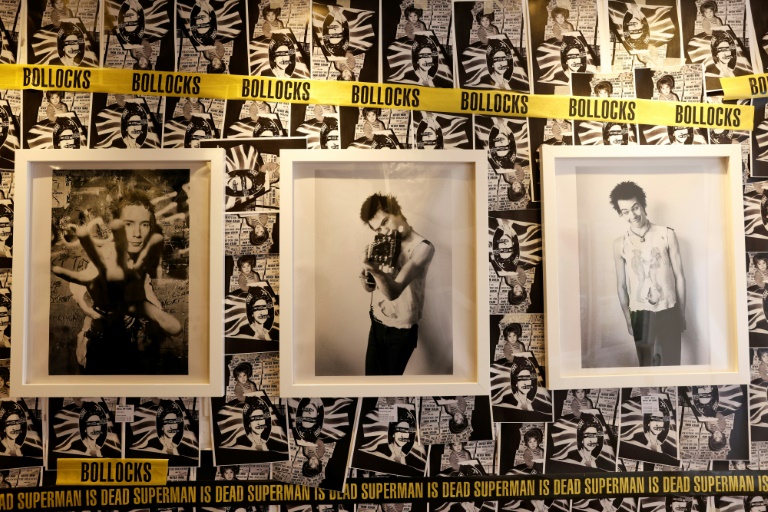 LONDON: Dennis Morris was the official Sex Pistols photographer, taking some of the most iconic images of the 1970s punk trailblazers.

More than 40 years after the band shot to notoriety, an exhibition of Morris’s classic photographs is revealing the mayhem and violence that surrounded the band to a new generation of fans.

The immersive show — “SID: Superman is Dead” — also features a recreation of a hotel room bassist Sid Vicious smashed up in 1977.

The floor surrounding an unmade bed is littered with glass from smashed pictures, pages ripped from a Bible and a wrecked television.

“You read about Sid Vicious and you would think he was really a violent person, but he was actually quite a gentle person, very shy,” Morris told AFP at the central London gallery staging the show.

Vicious epitomised the “live fast, die young” mantra and ended up dead in New York at the age of 21 from a drugs overdose.

Months earlier he had been charged with stabbing his girlfriend Nancy Spungen to death.

“When he took heroin he completely changed, he became a completely different person and that was awful, he basically just fell apart,” said Morris.

In Morris’s original photograph of the hotel scene recreated for the exhibition, Vicious is seen half-naked lying between two beds while an unidentified person — “probably a fan” — is curled up asleep on one of them.

“One night Sid went absolutely berserk and completely destroyed his bedroom,” he said.

“My room was next door to his and eventually when the commotion stopped I pushed the door open to his room and there was complete devastation.”

Morris, 62, originally wanted to be a war photographer, but made his name photographing reggae legend Bob Marley.

One of the aims of the installation was to give a sense of the “energy and violence of punk”.

Singer John Lydon — aka Johnny Rotten — and two producers were attacked with razors.

At other times Morris remembers being “chased down the road” by pro-monarchists when they spotted Lydon.

“With Sid I found my war… they came out against the queen and there was this reaction which was shocking because people became quite violent sometimes,” the British photographer said.

“It became quite scary but for me it was really an opportunity to live out my dream (of documentary photography). I was there 24/7.”

Lydon — now 66 and a US citizen — recently said he had attended a street party for the queen’s Platinum Jubilee this month.

He said his dislike of the monarchy as an institution was as strong as ever, but he “totally respected” the 96-year-old head of state.

Whether Vicious would have changed his views will never be known, but Morris said he had also developed a “deep respect” for the queen.

“She’s held it together over the generations, despite coming to it at a very young age, and that’s a really tough thing to do,” he added.

“I was never really against them (the royals) but over the years I’ve grown up.

“None of us were against it really, it was just something that was said to create a reaction. All our parents had a picture of the queen on their wall or of Jesus, that’s how it was… we were just rebelling.”

Morris firmly believes that Vicious had “star quality” but his damaged background made an early death almost inevitable.

“His problem was that at the age of 14 his mother gave him heroin. And it was his mother who gave him the heroin that killed him,” he added.

After being released on bail from New York’s notorious Rikers Island jail following Spungen’s death, he was terrified of going back, he said.

“Because of his reputation he got raped quite a few times so when he came out on bail he said to his mother, ‘I just can’t go back to prison, I just can’t do it’, so she went out and scored and that’s what killed him.”

Spungen was found in the couple’s room at New York’s Chelsea Hotel with a fatal stab wound to the abdomen. Morris, however, remains convinced Vicious was innocent.

One of his favourite photographs is of the pair backstage in which Nancy is seen talking animatedly to a docile-looking Vicious.

“He would never have done that,” he said.