These Ultra-Detailed Photos of Ants Will Give You Nightmares – PetaPixel 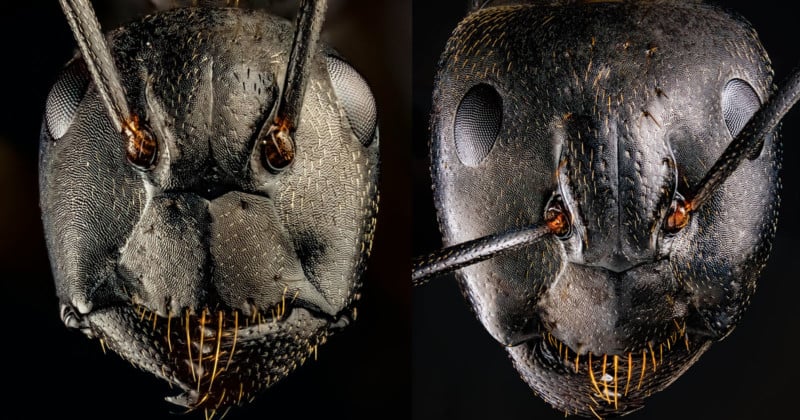 The macro portraits, which look like Halloween masks, were taken on Coogler’s Nikon D7500 using a macro rail that moves the camera in tiny increments, taking a photo as it goes.

“I have to take anywhere from 30 to over 300 photographs to get one final image,” Coogler tells PetaPixel.

“This is because the part that is in focus is like a thin slice. I take all of those images and ‘stack’ them in a process called focus stacking. After that, I process the image to bring out some of the colors and make the image sharper.” Coogler sets the lens, which can be used on full-frame cameras, to 5x magnification allowing him to get closer to an ant’s cranium than most would dare. He also uses two gooseneck LED lights that he diffuses with paper towels.

The resulting images bring out details on the insects that the human eye could never get close to seeing, nor would some of us want to.

Reddit users may have seen Coogler’s scary pictures of ants being posted in the last few days, with one post receiving over 65,000 upvotes. Coogler’s photography interests reach from the tiniest creatures to the giant objects far, far away. The young photographer has pictured Saturn and its rings, and even the Andromeda Galaxy. He’s also shot portraits of humans, and taken pictures of chimpanzees at the zoo.

What is Focus Stacking?

Focus stacking combines multiple images focused on a different spot to make a resulting image with a greater depth of field than any of the individual source images.

It’s a technique designed to overcome the limits of depth of field, in other words, when the camera’s setup can’t handle its depth of field capabilities.

PetaPixel recently featured a 3D printed microscope lens where the shooter, Micahel Widell, also had to use focus stacking to create images that are in focus and discernbile to the viewer.

More of Coogler’s work can be seen on his Instagram.