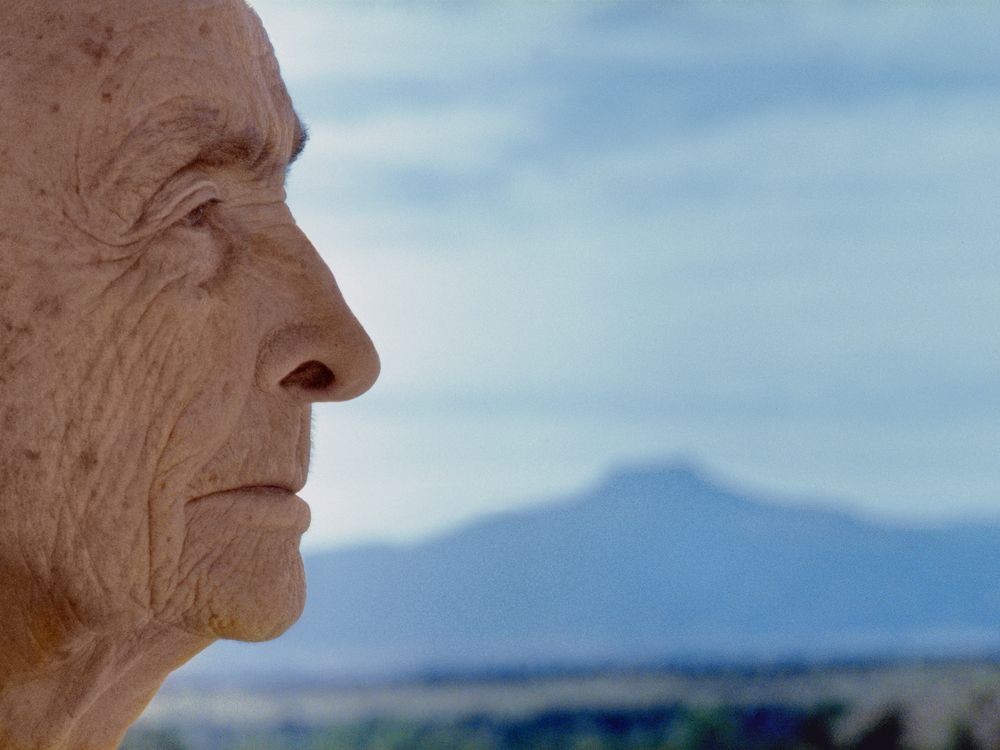 Who was Georgia O’Keeffe? It’s a question that permeates much of the scholarship and writing around the legendary painter, who was simultaneously one of the most photographed—and most mysterious—artists of the 20th century.

Was she reclusive and reserved, endlessly controlling her image? (A rumor maintains she once turned down a one-person show at the Louvre.) Did she paint female genitalia or just flowers? Was she bewildered by the attention that surrounded her work?

Even her personal life raises fascinating questions—was she in a romantic relationship with a man 58 years her junior? And if she was, should she be celebrated or vilified?

“Georgia O’Keeffe, A Life Well Lived: Photographs by Malcolm Varon,” on view at the Georgia O’Keeffe Museum in Santa Fe, New Mexico through October 31, attempts to answer that question through never-before-published photographs of the artist as she neared the end of her life.

Even the genesis of these portrayals speaks to her reclusive, elusive nature. In 1977, the museum says, a writer from Art News was poised to write a retrospective piece on the 90-year-old artist’s life. But when he arrived at the Ghost Ranch compound in Abiquiú, New Mexico, the artist told him she didn’t have any current photographs he could use.

Luckily, photographer Malcolm Varon lived nearby—and set to work. The result was more than 70 color images of O’Keeffe and her landscape of life in New Mexico. They are among the only images of the painter, who died in 1986 at age 98, in her later days.

Varon was there not as a friend but on an assignment, reports Hyperallergic’s Jasmine Liu, collating O’Keeffe’s artwork for an exhibit at the Guggenheim Museum. As their relationship developed, that dynamic bled into the photographs. In them, the artist is depicted with a welcoming demeanor, a gravity of posture and self-possession that immediately give way to joviality beneath the surface.

“It was an intimate situation,” Varon tells Hyperallergic. “ … Her iconic persona disappeared, for me at least, during that association.”

The photographs are also significant because they were taken in color, Ariel Plotek, a curator at the Santa Fe O’Keeffe Museum, tells Hyperallergic. The vast majority of portraits of O’Keeffe are in black and white, according to Plotek.

That aesthetic even trickled down to the way O’Keeffe dressed. “During her lifetime, she was rarely seen donning anything other than her nun-like, black and white robes, many of which she made or altered herself,” Liu notes. “She reputedly once explained that if she started wearing color, she would have no time left over to paint.”

These stories contribute to O’Keeffe’s portrayal as a no-nonsense, reserved person, but Varon’s photographs offer a different narrative. Part of that can be attributed to his distinct photographic process, which began before he took a single shot. Rather than create an entirely candid photo, Varon attempted to manufacture an organic emotional response by giving the person a direction, whether that be staring into the camera, listening to music or contemplating a memory. Once they were immersed enough in whatever he had asked them to do, he could then capture a photograph that showed the real person and not the public mask.

O’Keeffe herself was no stranger to the lens. In another fact seemingly at odds with her public persona, the artist was actually the subject of a variety of photographic portraits during her lifetime. Her husband, Alfred Stieglitz, captured her in more than 300 photos over 20 years, according to the Alfred Stieglitz Collection, including a series of striking—and controversial—nudes. O’Keeffe later said how struck she was by viewers’ response.

The obsession with showing the real Georgia O’Keeffe continued past Stieglitz. LIFE magazine ran a cover story on the artist in 1968, produced at her New Mexico home. And in 1979, Andy Warhol depicted her in a series of diamond dust prints.

Photography could both lift O’Keeffe up and detract from her own artistic endeavors. Varon suspects that her shy public stance later in life was a long-term reaction to the Stieglitz nude photographs and their reception.

“She did a lot to negate that idea of herself as a sexualized person, and her paintings as sexualized paintings,” Varon tells Hyperallergic. “So this idea of her as reclusive, as iconic, simply came from celebrity status.”

“Georgia O’Keeffe, A Life Well Lived: Photographs by Malcolm Varon” is on view at the Georgia O’Keeffe Museum in Santa Fe, New Mexico through October 31.