Vivian Maier: Anthology review – the eccentric nanny with an eye for a picture – The Guardian 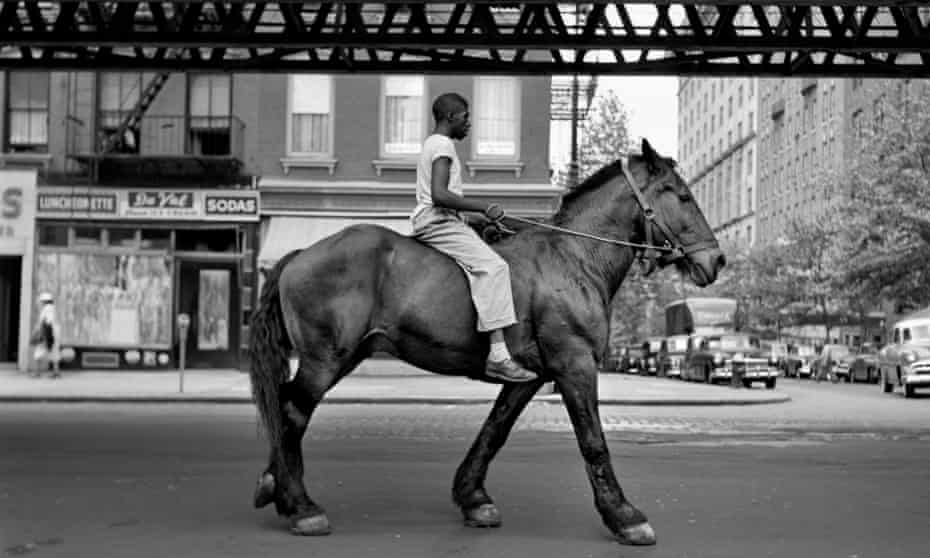 Vivian Maier: Anthology review – the eccentric nanny with an eye for a picture

MK gallery, Milton Keynes
The first large-scale UK show of work by this mysterious street photographer asks: who was this woman? And did she know how good she was?

V ivian Maier was unknown as an artist during her lifetime. Wildly prolific, and with an eye and an attitude all her own, she left more than 150, 000 photographs, some printed by herself, many processed as negatives and yet more still undeveloped and left in their canisters. They filled boxes and suitcases and trunks, which spilled out their contents in avalanches of film rolls and envelopes, carefully preserved and lodged in storage facilities until the money ran out on their lockers and they were auctioned off.

Eventually, and serendipitously, they began to come to light when Maier , late in life, was almost destitute and almost certainly mentally ill, more forgotten than remembered except to the families who had employed her as a nanny in Chicago, New York and Minneapolis. Remembered too by some of her subjects and the people she wandered among with her camera and her funny, old-fashioned clothes on the streets of the cities where the girl had spent her peculiar double life as a children’s nanny and compulsive professional photographer.

At some point Maier called herself a spy, and like any good spy she frequently changed the spelling associated with her name and gave herself different backstories depending on who asked. She holed herself up in the rooms she had been given by the families that employed her. She put sturdy locks on her doors and filled these quarters and upper areas with her boxes and the towers of newspapers she accumulated and never threw away. Her employers tolerated and indulged her until they couldn’t, and as the children grew things often got difficult, so Maier would move on.

Her young charges also gave her something of an alibi when she took them to the roads on what she called “shooting safaris”. She may have taken the kids with her on these types of adventures during the 1950s, 60s and 70s, but Maier was no Mary Poppins. She led them to the Chicago stockyards where the animals were penned and slaughtered, and to the poorest parts of town, the ghettoes and the rows of shotgun houses, the tenements and the burnt-out lots in search of things to photograph as well as providing an alternative education to these privileged kids who until then barely knew what poverty was.

At a time when the American dream was falling apart, Maier was alert to the social plus political conflicts of the nation. She was an outspoken feminist and encouraged independence of spirit in even casual acquaintances, who she would sometimes buttonhole for impromptu audio interviews. She never married and her friendships were few. We have little idea what she thought of other photographers, but it is telling that in one photograph here she took a picture of a family looking at paintings in the Art Institute regarding Chicago. She is not Robert Frank or Helen Levitt , Diane Arbus or William Eggleston , or Weegee or Enrique Metinides , although at times her work reminds you of these other photographers – either because of the subject matter or her framing or even her use of colour : but however much we might think of her in the light of these better known photographers’ works she is always herself. How well she knew them, either from visiting exhibitions or in newspaper reviews of their works, will be unknown.

Like the photographer herself, her art seems to have come out of nowhere, and more than a decade after her death in 2009, is still something of an enigma, even though books have now been written and a film of her life is on Amazon Prime . Any exhibition about Maier must ask who was that lady, and must also ask how good was she as a photographer, how knowing or innocent, how purposeful was the girl art? With more than 140 black and white and colour images, as well as a number of films and audio recordings, the first large-scale show of her work in the UK, at MK gallery in Milton Keynes, is a complication and a delight. I laughed aloud at the grim, irresistible colour shot of a man’s bandaged head, his bald dome with a few sparse hairs peaking out at the top as he looks at a magazine page whose headline reads COME ON OVER. He is on a train, in addition to Maier has photographed him from the row behind.

Two guys bend over a coiled hose on the wet sidewalk. One holds out his hand, as if he were tentatively about to touch a coiled snake. A burnt-up armchair squats in the street, and a realistic human doll sits, like an abandoned baby, at the bottom of a garbage pail. The news vendor snoozes in his kiosk, surrounded by shouting headlines and the magazine title Life repeated under his supporting elbow. He is sleeping through it all. A young black man rides a horse bareback under the elevated railway in New York in 1953. What grandeur this image has. Who wouldn’t stop to look? Overdressed ladies within veils, a guy with a cigar who might be smiling at the lunch he has had, Kirk Douglas attending the premiere of Spartacus, and Donald Koehler, at 2 . 49m (8ft 2in) the world’s tallest man, pausing to stoop and read the menu in a diner window. A fully clothed man sleeps on an empty Long Island beach, kids play in an alley, two hands tenderly touch, a homeless guy looks defeated. It is all here. Maier could do intimacy and even distance, the head-on, the furtive, the inexplicable.

It is a snowy day in the suburbs, perhaps near where Maier lives. Everything is black and white and grey except the red light at the traffic stop, a tiny burst of colour like a bullet hole framed in the V between two tree trunks. Maier is described as a street photographer. Sometimes she photographed not the life on the street but the street itself, from the abstract signs on the tarmac, to the asphalt waterproofing around the rooftops, the neon within the puddles, the headlines and the funnies stacked up to be sold.

Shuttling between Chicago together with New York, and taking us from the early 1950s until 1986, when she apparently stopped taking photographs, Maier not only recorded whatever came her way, she also recorded the interactions between digital photographer and subject. She regularly put herself in the frame. Sometimes Maier is a shadow on a wall or cast across a lawn sprinkled with buttercups. Here she is again, the shadow involving her hat cast over the concrete-caked denim butt of a construction worker bending in order to his task, and the silhouette of hat, coat and additionally handbag framed by a movie poster (Heaven Can Wait read the words above the shadow) on the side wall of a cinema. Her reflection is caught in a car’s wing mirror, on the window of a car door and on its glossy paintwork. She ghosts across shop windows and windscreens and on the fish-eye globe of a garden sprinkler. There she is again, caught on a pane of mirrored glass being hefted into a truck by a removal man. The girl fleeting image, as well as the woman shadow, appears and reappears throughout this exhibition. Now in a diner’s mirror, expressionless, looking slightly upwards rather than at herself. The small girl beside her focuses on your ex nanny’s reflection in the mirror. As much as reflections, these are portraits of someone unknowable, framed simply by mirrors and framed inside her photographs.

Maier constantly not to mention repeatedly recorded her passage through the world, even in the particular surprised looks and hostile stares her subjects sometimes gave her. Occasionally the lady asked strangers to pose, and at other times denied ever having coerced anyone into being photographed at all. In her dowdy disguise and also forthright approach, the square format Rolleiflex dangling in waist height in the hands, even the tough guys seemed to give her a break.

A kid holds the string attached to the helium balloon between your girlfriend teeth, as if it had been an empty yellow speech bubble, and a veteran with no ear and a rudimentary prosthetic mask makes a call on the street. We could talk of a compassionate eye but I’m not sure it helps or even if it is true. It was all the same to Maier and she didn’t flinch or pass by.