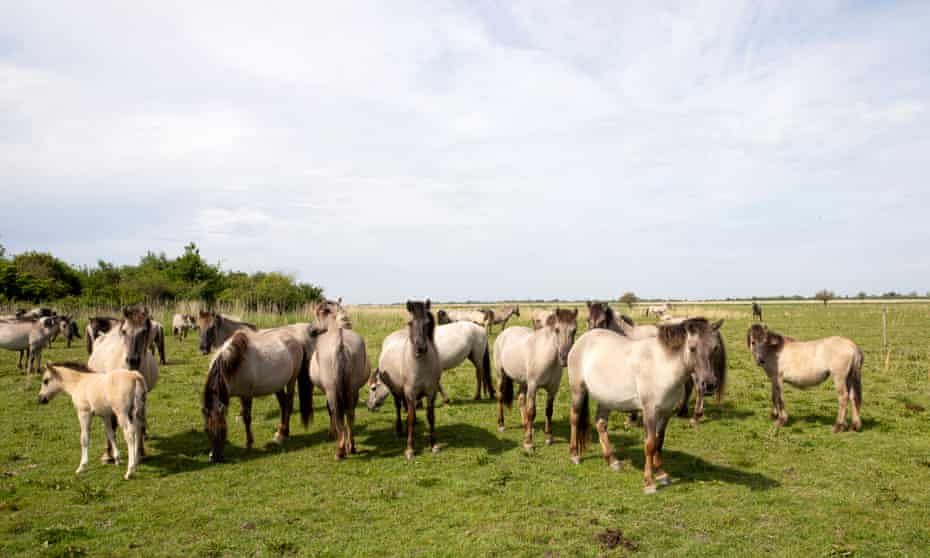 Oostvaardersplassen reserve reshaped conservation in the 1980s as nature was allowed to take its course, now it is rewilding in a more managed way

We are in a 4×4 driving through long grass on a bit of land that was once at the bottom of the North Sea. Drained in 1968, this landscape forms part of the world’s largest artificial island, home to Oostvaardersplassen, one of Europe’s most controversial and influential rewilding projects.

Herds of free-ranging horses, white-tailed eagles, cattle egrets, high-speed trains, planes, powerlines, wind turbines and the city skyline of Almere all fit in a single frame. It is 7,500 hectares (18,500 acres), roughly the size of Manhattan, and 30 minutes’ drive from Amsterdam. Everything you can see is less than 50 years old.

Like beavers, the Dutch dried out this land by building a huge network of dams. The site is up to five metres below sea level, flanked by miles of intensive, flat farmland and two new cities. Hans-Erik Kuypers, the park ranger who is showing us around the reserve, turns off the engine and birdsong enfolds us.

It is sometimes referred to as the Dutch Serengeti, and there is a cacophony of rare meadow birds – bluethroat, reed warbler, willow warbler and Cetti’s warbler – all belting out their song. Two weeks ago there was a hoopoe. The wildlife sounds grateful for this little slice of manufactured wilderness. “You could imagine people thinking there’s nothing here,” says Kuypers. “It’s about listening, not looking.”

In the flat distance are little black spots that look like mites but are herds of cows and deer. These herbivores are acting as ecological tools, helping maintain vast wetlands and grasslands that support these rare birds.

We pass through a herd of about 250 Konik horses busily trying to attack and mate with each other. Open cuts are testament to the power struggle. Males are not castrated, because it is believed that testosterone is key to creating these interesting group dynamics. “Everything that happens here is a play for dominance and reproduction. They need to express their natural behaviour,” says Kuypers.

This herd of horses is alive and healthy, but many of their predecessors here starved to death or were shot. Oostvaardersplassen was embroiled in scandal after thousands of cows, horses and deer died during the winter of 2017-18 because the founders of the project believed that nature should govern, and starving to death was considered a natural form of population control.

Numbers fell from 5,200 to 1,850 that winter, with 90% of animals shot before they starved to death. There was widespread outrage and the founders received death threats. “It was a terrible time,” says Kuypers.

This was the birthplace of radical thinking about rewilding, which has had a huge influence in the UK (where it was one of the inspirations for the Knepp estate in West Sussex) and elsewhere in Europe. However, mainly as a result of these deaths and the outrage that followed, it has been blacklisted by some ecologists, who believe its “ecologically and ethically untenable” management has tarnished rewilding’s reputation.

Kuypers says the story was never meant to be about grazing animals, explaining that it was originally a bird reserve, which continues to provide refuge for dozens of rare and declining species. Back in the 1970s, thousands of greylag geese flew over this reclaimed land and set up home. They turned the wetlands into an interesting mosaic of habitats. Other birds arrived too, including spoonbills, egrets and white-tailed eagles, which then spread elsewhere in the Netherlands. At the time, the land had been set aside for industrial development and was in the process of drying out, but an ambitious and influential group of ecologists led by Frans Vera were fascinated by what they were seeing and put forward another plan: to leave it for nature.

Vera said seeing greylag geese engineer new habitats caused a “paradigm shift” in his thinking. “Nature conservationists didn’t have any interest in Oostvaardersplassen when I got involved in 1979 because they always believed it would develop into a thick forest and we would lose all the bird species we love so much,” he says. He then turned to larger mammals. “We found out that large grazers drive habitat creation and that’s now a cornerstone of rewilding.” By 1983 they had created a nature reserve with animals brought in to kickstart the natural processes.

“Every square inch of land in the Netherlands is disputed,” says Kuypers, so ringfencing this land for rewilding – a totally new way of working with nature – was revolutionary at the time.

Although the birds arrived by themselves, many other animals were brought in and the reserve became like a Big Brother house for nature. Different natural elements were introduced, down to the seeds for reedbeds, which were scattered from a plane. Ecologists wanted to slow the growth of trees in the park so it would remain an open habitat for wetland and grassland birds so they introduced grazing animals.

“Back-bred” animals resembling their extinct relations that would have lived in Europe during the Pleistocene, or ice age, arrived: Konik horses from Poland in 1983; Heck cattle from Germany in 1984; and red deer from Scotland in 1992. They were hardy and fitted in with the carefully cultivated wild aesthetic. This work drove radical changes, pushing traditional conservation towards “nature development” with large herbivores as the “ecological main structure”, which is now common thinking in rewilding.

In 2018, after an outcry over the deaths of so many animals, a committee coordinated by the provincial government called for an end to the policy of allowing “natural processes” to govern herbivore populations, and said numbers must be kept below 1,500. Today a vet comes regularly to check on the animals. Those in bad condition are fed over the winter; then, when numbers increase too much, they are moved to new areas or killed, and deer and horse carcasses can be sold as “wild meat”.

Many lessons have been learned but the rangers working here are still trying to shake off the public image of animals starving to death. “A lot has changed. No animal has died of starvation in three years, yet we’re still seeing these images circulating,” says Kuypers, who has a weekly blog to update people on what is happening at Oostvaardersplassen. “I can’t do anything about it – it’s just one-way communication,” he says about people who troll their work on Twitter. “It really gets under my skin.”

Another impact of having too many herbivores in the landscape is that bird numbers fell. Birds that like tall grasses and scrub such as little grebes, spoonbills and egrets suffered because they had less space to forage. “The idea was that nature could take care of itself on this land, but that’s not true,” says Kuypers. “It was not good for biodiversity.”

Rangers now intervene in a number of ways. Within the park, land is divided into blocks, each with very different habitats, including mudflats, reeds, wet grassland, dry grassland and woodland. The terrain is shaped by dykes, pumps and water channels, allowing five different water levels on the site. Wetter sections of the reserve are metres higher than drier sections because, like a sponge, they have expanded as they absorbed water.

The park rangers intentionally create dry times and wet times by modifying how much water gets into each section, because “change is good for nature”, helping create a dynamic landscape.

They are currently carrying out a “marshland reset”, which means lowering the water level over a period of three years to encourage new reed growth, which will benefit marshland birds. In the grassland area they are creating wet areas and pools, which will benefit geese, herons and waders. Spoonbills, egrets and little grebes like eating small fish such as sticklebacks, and fish ladders are being constructed to make sure these can reach the reserve. Areas are being fenced off for planting trees. More than a kilometre of ditches have been built to give animals shelter and privacy from humans.

“The goals of the area are human goals to biologically make this a richer place. It’s a huge human experiment and continues to be so,” says Kuypers. “We make nature here … We’re still governed by natural processes as much as possible, but we have enormous impacts as human beings.”

Kuypers does not refer to “rewilding” because he thinks it does not accurately reflect how much humans control the landscape. Instead, he calls it “nature development” – which sounds more interesting in Dutch than in English, he says.

Rewilders have made a real effort to dispel accusations of depopulating landscapes, which is another reason many have distanced themselves from Oostvardesplassen. The vast marshland of the reserve is totally closed off, and the grassland section is only open for a few visitors a day.

“Everything flies away when we come. If you do that 10 times a day, it costs them too much energy. I’m driving around as a guest in nature. Every time a bird flies away I hate it,” says Kuypers.

Despite this, the wooded parts of the reserve are always open and very popular. Cycle routes, footpaths, viewpoints and the visitors centre, which receives up to 150,000 visitors a year, are being improved.

For Vera, Oostvaardersplassen was part of a vision to link it with the Veluwe national park to the south-east. His plan included creating corridors so animals could move between reserves, but this long-term plan has been abandoned.

Rewinding 100 years: the Devon neighbours who united to rewild on a grand scale
Read more

Vera feels that the public outrage over the deaths was overblown. He is fundamentally against capping herbivore numbers and says what is happening in Oostvaardersplassen has nothing to do with rewilding because the park is no longer governed by natural processes.

“What is happening now in Oostvaardersplassen is killing the integrity of the ecosystem. The people who do that are like stamp collectors creating things artificially to get as many bird species as possible,” he says.

Dr Paul Jepson, a conservationist at Oxford University, says rewilding should be about shaping better futures, not creating an agreed natural state. “In talks, I use a music analogy. One, conservation had, like prog rock, become overblown and self-congratulatory. Two, the Oostvaardersplassen, like punk rock, burst on to the scene creating controversy and excitement and shaking things up, leading to, three, a proliferation of new bands (projects): the new wave.”

River rewilding projects such as Gelderse Poort and Border Meuse, which started in the years after Oostvaardersplassen, have approached things differently and do not have the same notoriety.

Despite addressing many criticisms, Oostvaardersplassen is still dogged by the past, with many rewilders looking to distance themselves from it a bit like an old relative with outdated views. It changed the face of nature conservation, however, and was a pioneering example of the benefits of embracing uncertainty and letting nature take its course.

It was a rewilding milestone and remains an extraordinary legacy of human ingenuity and determination. “We’ve been fighting for this area since the beginning,” says Kuypers. “And we still are.”

Find more age of extinction coverage here, and follow biodiversity reporters Phoebe Weston and Patrick Greenfield on Twitter for all the latest news and features